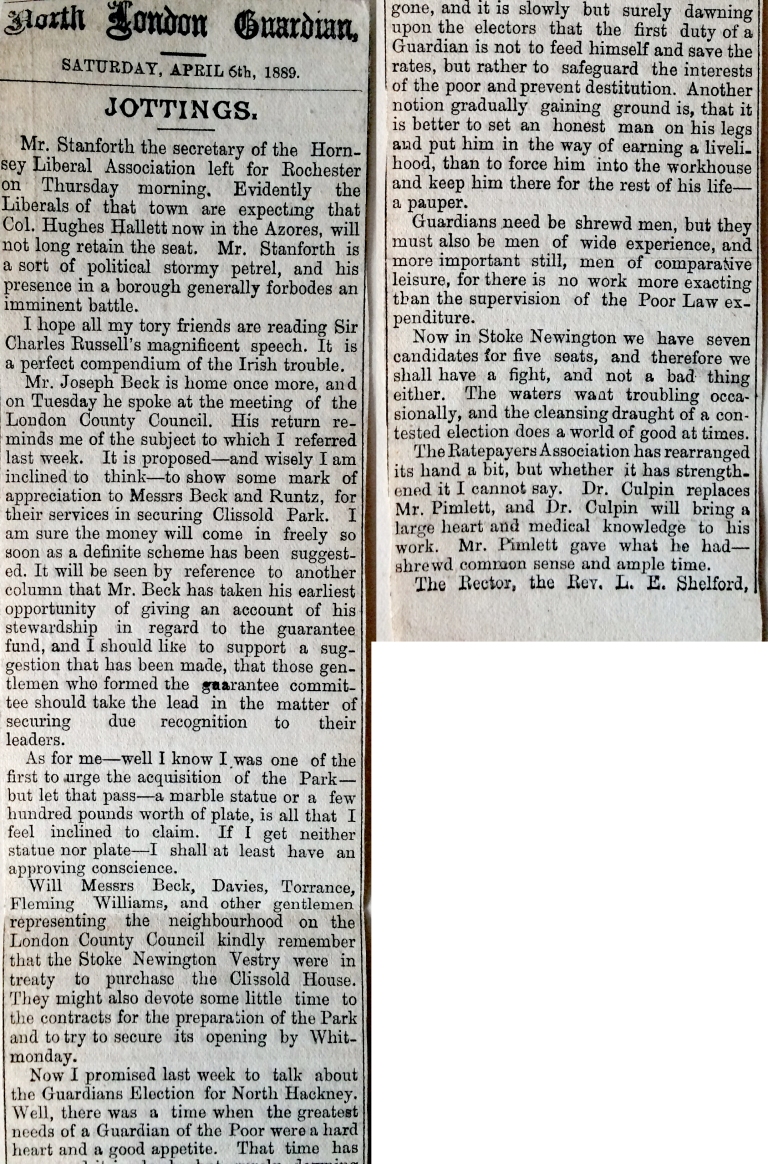 Mr. Joseph Beck is home once more, and on Tuesday he spoke at the meeting of the London County Council. His return reminds me of the subject to which I referred last week. It is proposed—and wisely I am inclined to think—to show some mark of appreciation to Messrs Beck and Runtz, for their services in securing Clissold Park.

I am sure the money will come in freely so soon as a definite scheme has been suggested. It will be seen by reference to another column that Mr. Beck has taken his earliest opportunity of giving an account of his stewardship in regard to the guarantee fund, and I should like to support a suggestion that has been made, that those gentlemen who formed the guarantee committee should take the lead in the matter of securing due recognition to their leaders.

As for me—well I know I was one of the first to urge the acquisition of the Park—but let that pass—a marble statue or a few hundred pounds worth of plate, is all that I feel inclined to claim. If I get neither statue nor plate—I shall at least have an approving conscience.

Will Messrs Beck, Davies, Torrance, Fleming Williams, and other gentlemen representing the neighbourhood on the London County Council kindly remember that the Stoke Newington Vestry were in treaty to purchase the Clissold House. They might also devote some little time to the contracts for the preparation of the Park and to try to secure its opening by Whit-monday.

Now I promised last week to talk about the Guardians Election for North hackney. Well, there was a thee when the greatest needs of a Guardian of the Poor were a hard heart and a good appetite. That time has gone, and it slowly but surely dawning upon the electors that the first duty of a Guardian is not to feed himself and save the rates, but rather to safeguard the interests of the poor and prevent destitution. Another notion gradually gaining ground is, that it is better to set an honest man on his legs and put him in the way of earning a livelihood, than to force him into the workhouse and keep him there for the rest of his life—a pauper.

Guardians need be shrewd men, but they must also be men of wide experience, and more important still, men of comparative leisure, for there is no work more exacting than the supervision of the Poor Law expenditure.

Now in Stoke Newington we have seven candidates for five seats, and therefore we shall have a fight, and not a bad thing either. The waters want troubling occasionally, and the cleansing draught of a contested election does a world of good at times.

The Ratepayers Association has rearranged its hand a bit, but whether it has strengthened it I cannot say. Dr. Culpin replaces Mr. Pimlett, and Dr. Culpin will bring a large heart and medical knowledge to his work. Mr. Pimlett gave what he had—shrewd common sense and ample time.