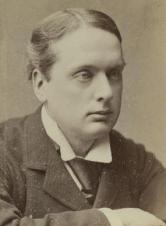 Archibald Philip Primrose, 5th Earl of Rosebery, 1st Earl of Midlothian, (7 May 1847 – 21 May 1929) was a British Liberal statesman and Prime Minister. He served as the first chairman of the London County Council, set up by the Conservatives in 1889. Rosebery Avenue in Clerkenwell is named after him.

“Mr. Beck, Lord Meath, ladies and gentlemen, this occasion, joyful though it be, is not one that calls for any prolonged remarks from me, and I have three reasons for not addressing you at length. In the first place, although the House of Lords is not supposed to be an exhilarating audience, it is much better than an audience of umbrellas (laughter), and in the second place I feel I come as a reaper where others have sown, for though the County Council are privileged to see the completion of your labours, it was in conjunction with the Metropolitan Board they were chiefly carried on. (Hear, hear.)

And thirdly, I cannot help feeling, we, in the Council, have strained to the utmost limits of our jurisdiction, and are almost beyond the boundary which divides us from another, and I trust friendly power, the County Council of Middlesex.

Mr. Beck, I was greatly interested in the record you have presented to us, of the generous individual effort by what this great enterprise has been so well carried out. I am one of those who believe the contribution of the County Council to these open spaces, is not meant to swamp or supersede, but to stimulate and encourage local effort. (Hear, hear). Wo are the treasury department of the metropolis; we have calls on our purse from day to day, more or less pressing, more or less large, but which we have to meet in a spirit of equity, not merely with regard to those who make the demand, but those who find the supplies. (Hear, hear.)

We hold the purse not of one or another district, but of the whole metropolis of London outside the city, and have to administer these funds, not to make one quarter happy and triumphant, but with a spirit of justice to the great body of the ratepayers. (Applause.)

Now, ladies and gentlemen, we are an infant body struggling among many difficulties, and without perhaps that measure of encouragement which we might expect from our electors. We are an infant body and we have to look abroad without so much experience as we could wish, to see in what way we can best deal with our power for the happiness and welfare of that great mass of opulence and misery which is leaned the metropolis. (Hear, hear.)

I believe the County Council have made up their minds that we can in no respect meet the wishes of the population better than by furthering and improving the accommodation of the working classes, and in the second place by securing at every opportunity open spaces for the people. We have to consider the rate at which London is growing, and that what is an outlying piece of ground to-day, not to be separated from the country outside, may have to be secured to-morrow to secure the health and happiness of a vast urban district. (Applause).

Well, ladies and gentlemen, that requires some vigilance, it requires some courage; and it requires at the same time a bold responsibility, and I am bound to say an expenditure which, if not carefully controlled, may yet land an in difficulties. (Hear, hear).

Ladies and gentlemen, we cannot bring London to the country, we must endeavour to bring the country as far as possible to London. We have, I believe, at this moment in London, more open spaces than in any other city in the world, but that does not meet the difficulty with which we have to cope. In other cities almost every house has its own open space. Our ground is too valuable for that, our open spaces must be in the aggregate, and the more we can increase the number and volume of these open spaces, the more, I believe, shall we deserve the gratitude of the citizens of London. (Cheers).

Well, ladies and gentlemen, it is not now my task to detain you any longer, but I venture to assure you the County Council have had a rich reward for their labours, which are heavy, in coming round been to-day. We have walked the boundaries as the parish schools used to walk the boundaries, but we have not received that periodical flogging which was inflicted on the school children, to impress indelibly on their memories the importance of the occasion. (Laughter).

At present, we see, in all their native beauty, the trees which decorate this park. I don’t know why it is, but the London tree, when it comes under the charge of the public authorities, is lopped and trimmed, till it resembles more an inverted mop than these monarchs of the forest we aim to cultivate. (Laughter).

I hope the trustees will be wise enough to leave the trees to nature as much as can they can. (Cheers). In the meantime, I can assure you this occasion will only stimulate us in our work, in the endeavour to secure for the people of London as many more of these open spaces as possible, on which so largely depend the happiness, the health, and the morality of the people. (Cheers).

In the name, and on behalf of the London County Council, I declare Clissold-park open to the public for ever.” (Loud Cheers).